I was all set up, I grabbed my backpack, put my laptop in and ready to go. We reached the railway station by 4 PM and had the train at 5:30 to Hyderabad. I was excited. Firstly because I was taking a few days off college after 3 months, secondly I am going to visit this Pycon thing which I heard about from my friend Kuntal a few months back.

I originally planned to get the student tickets, but got caught up with the schedule and had to get the regular ones. It’s alright, I thought, I just hope the experience (or the food) makes up for it. We reached Hyderabad by 12 midnight, and stayed at my roommate’s place. Crashed on the bed by 1. I was excited and couldn’t sleep for a while. But my body gave in to the fatigue of the travel.

I dressed to my best in the next morning. We took a cab, I was enjoying the Hyderabadi streets and traffic. As we approached HICC, I saw the Pycon posters - enter nervousness. Amongst all the excitement to meet developers with similar interests, I realized:

I wasn’t very sure how I’d connect to people when the one thing that brought them together - Python - wasn’t my go-to language for anything. I barely ever used python. Even when I had to work on a project with a Raspberry Pi, I wrote the entire application in Java and ran a few tiny python scripts on top of it, but that’s it.

Upon reaching the beautiful HICC, I saw people, all sorts of people walking around with their Pycon IDs and clicking photos, talking to each other. Nothing unusual. You see that everyday.

But that was not a regular crowd.

That was a passionate group of people who loved doing what they did. They were developers of all ages, all races. Some of them came from far off places. They had been united by one common interest - writing software, making a difference and sharing ideas.

I was thrilled and scared at the same time. What if I am not good enough? What if they don’t accept me as one of them? But damn it, I paid for this and I travelled far enough.

I reached the counter, looking around at people with clothes that proudly said that they were developers. A Hacktoberfest T-shirt here, a Linux t-shirt there. I got my ID, met Kuntal and grabbed my goodies and stickers(!). 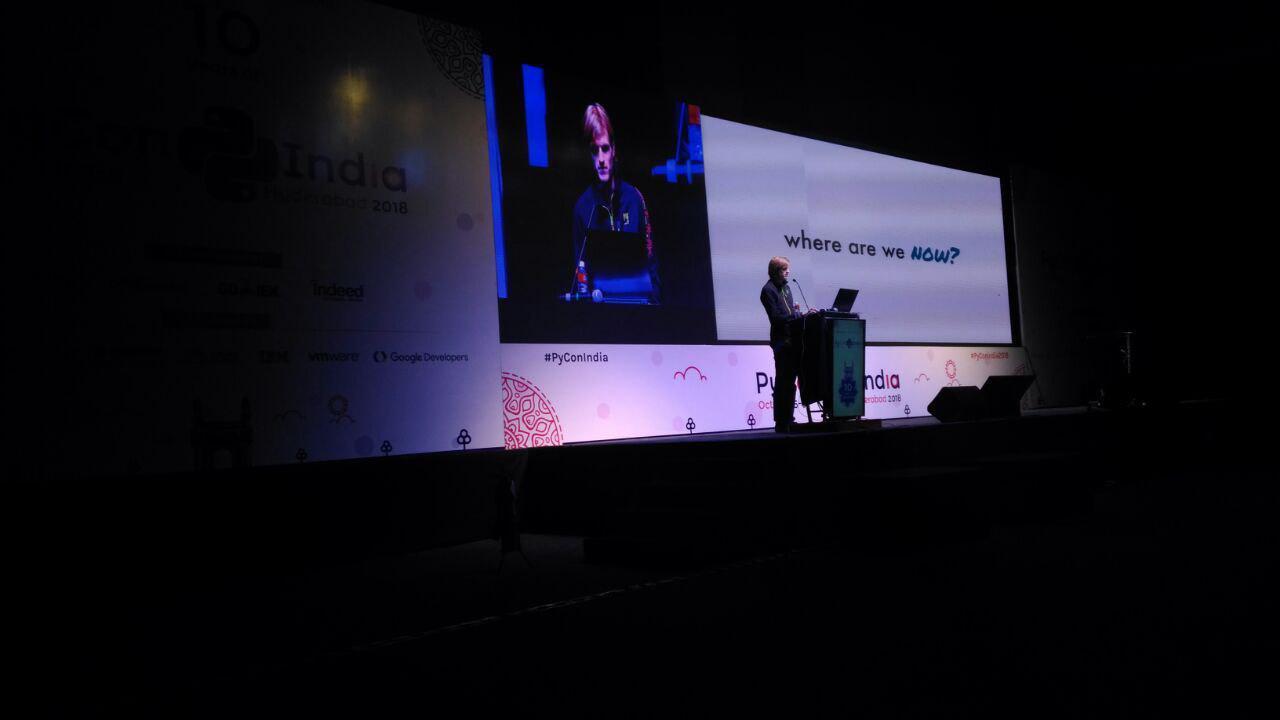 After the amazing speech, I turned to the audience and I saw hundreds and hundreds of developers. Young and old. It was overwhelming.

I started visiting the stalls. This was my chance. Connect, I said to myself. I found out about the job opportunities. I met some really cool people in the process. I visited the open source communities and worked some programming contests and quizzes.

I realized I was wrong. The community made me feel welcome at home. It felt like I am a part of it. No more an alien. I was one of them.

I went to the Pyladies and the LinuxChix India community stalls and that was the first time I met so many lady programmers who were genuinely passionate about it. They have been doing a great job encouraging more women into technology.

Then, there was the FOSSASIA stall. I met Mario Behling and his team demonstrating the PSLAB there. They also organized Jugaad fest, Codeheat and a lot more! I couldn’t believe that I was talking to the founder of FOSSASIA. They were making wonderful stuff, open for all and yet so down to earth and genuine.

In the PSF stall, I was curious about this GitCoin thing on the stickers, and out of nowhere a guy with glasses - who I later found out was Kushal Das- stepped in and said, “Gitcoin is about paying developers for contributing to open source. Open source is all about money. If anyone says otherwise, DON’T BELIEVE THEM!” I wasn’t so sure how to react for a moment or two. This was interesting!

I kept hopping stalls for a while and came lunchtime.

Pycon India 2018 had one of the best buffets I have ever had. All the variety, all the freshly made stuff, all for you. It couldn’t have been better.

I attended a few more speeches, learnt a lot about optimzing applications, architecting solutions efficiently and how software can create a huge impact on the society- with the power of open source and collaboration. I got the chance to listen to the lightning talks after that.

I was amazed to see what people were doing with software!

I came back excited this time, attended the keynote by Travis Oliphant.

I couldn’t believe who stood before my eyes. Although I am not a regular Pythonista. I have heard about and seen Numpy, Scipy and Anaconda in action. The guy who created them all stood before me.

He shared some wonderful insights on how things changed over the years, how the community grew and how he evolved with it. He shared his journey from being a scientist to be the founder of Quansight. And the importance of family and relationships.

I later had the chance to meet him personally. He gave me some valuable insights on how to manage time effectively and how to think while building something. How to look for certain things and going into the details. 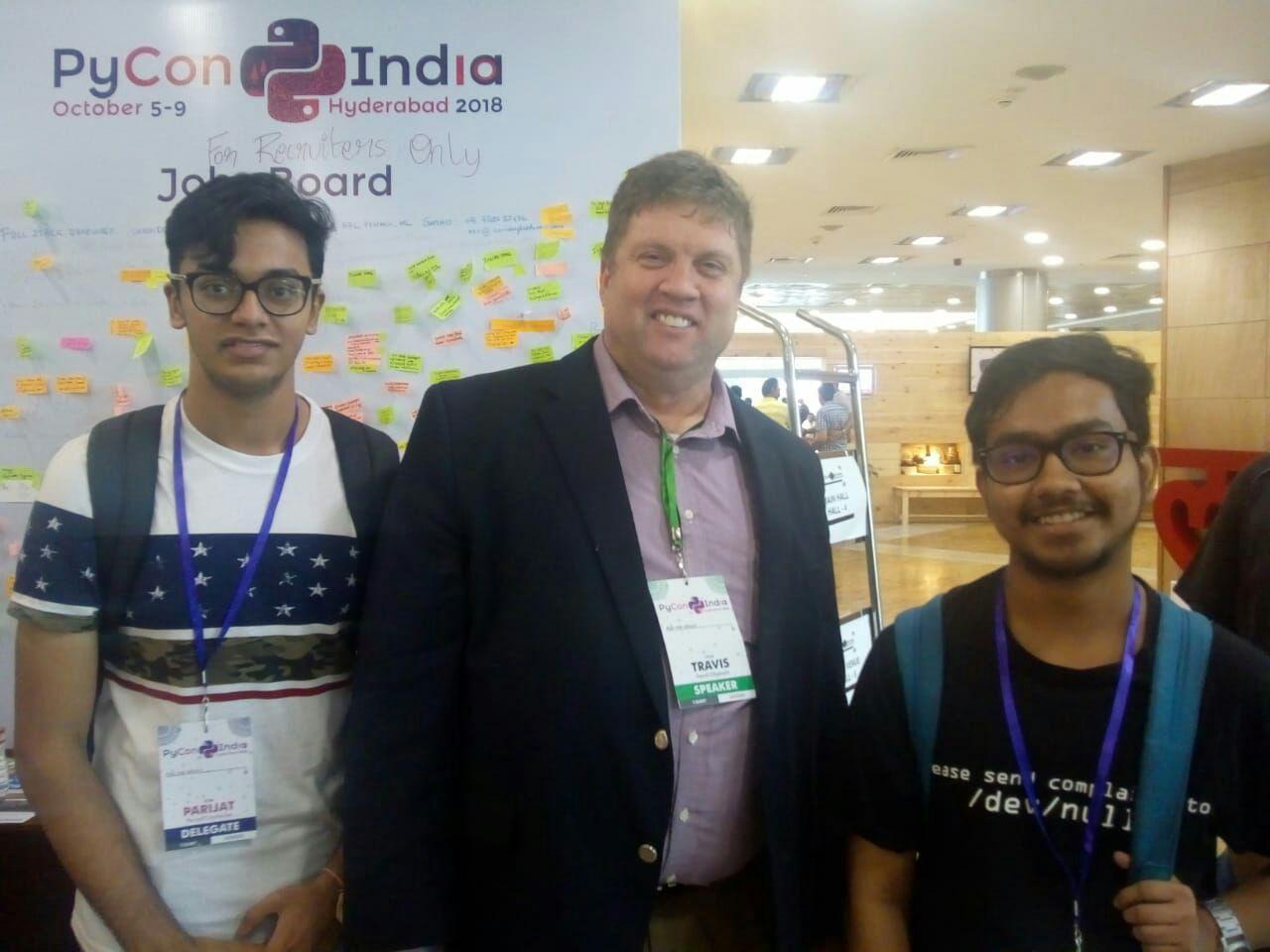 So, I have met someone who literally changed the lives of millions. Something to be taken off my bucket list.

I later got the chance to meet Armin Ronacher as well who shared some great tips about what and what not to worry about while building web applications.

Although I wasn’t a Pythonista, it all made sense to me!

Hopped a few more stalls, met few people at the ILUGD. Everyone around me were friendly creatures. Open minded. This was all overwhelming.

The conference of Pycon India was concluded with Carol Willing, core developer of Jupyter and CPython, and her inspiring speech about the future of Python. It was wonderful. She took us back in time through the entire conference once again. Recaped the moments we had in the conference.

After attending the lightning talks, my feet felt heavy. I didn’t want to go back. After all of this, this is where I wanted to be. I had two more days left.

The developer sprints helped me connect, work with the community and get to know how open source works better. Although, I have been an open source contributor for sometime, the dev sprints really gave me a much needed push.

I have been slacking without motivation for a month before that. Not having written any code for a month, I wasn’t very confident. I just wanted to make sure that I didn’t embarass myself.

I joined the Jupyter team with Carol Willing and Miss Madhu mentoring the developers for iPywidgets and other Jupyter applications. I decided to work on jupyter/qtconsole, since I had worked on some Qt applications, albeit they were on C++.

I started reading some code and documentation. I was surprised how fast I could understand whatever was happening inside. Python is a really easy and welcoming language I figured.

I went up to Carol, sat next to her and she gave me some nice pointers to get started off with it. I sat with a developer with 41 years of experience and few other developers and coded.

Wait, this is what I have been aspiring to do for the last 8 years of my programming career! 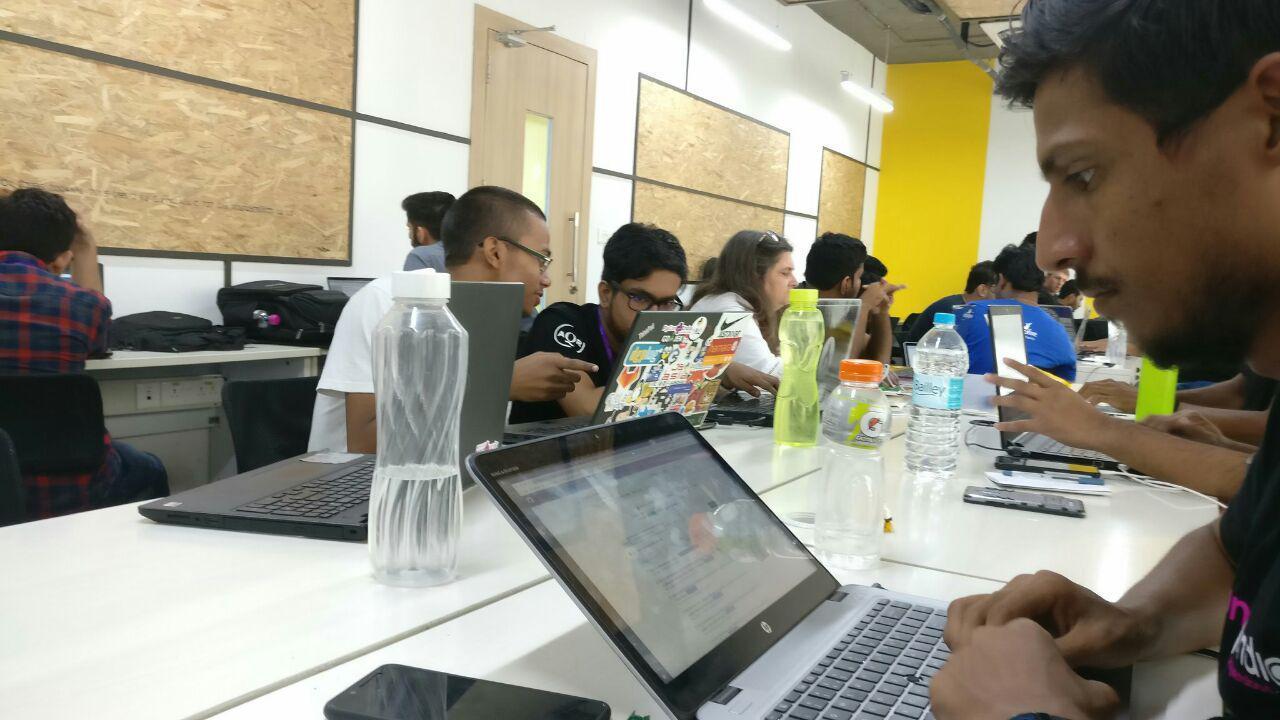 Developing with Jupyter and Carol

This was dream coming true.

I got my first pull request accepted and merged by Carol to qtconsole. And the feeling was wonderful.

This, this changed everything. I finally got a reason to start programming once again. I started looking out for more probable bug fixes, documentation changes that could help the projects.

I even got the chance to talk to her on a human level. She shared her story - how things began from her home near IBM when she started coding in her fifth grade. From Basic to Processing to Python. The long way she has come since then.

We had lunch together, on the floor.

And we clicked selfies! 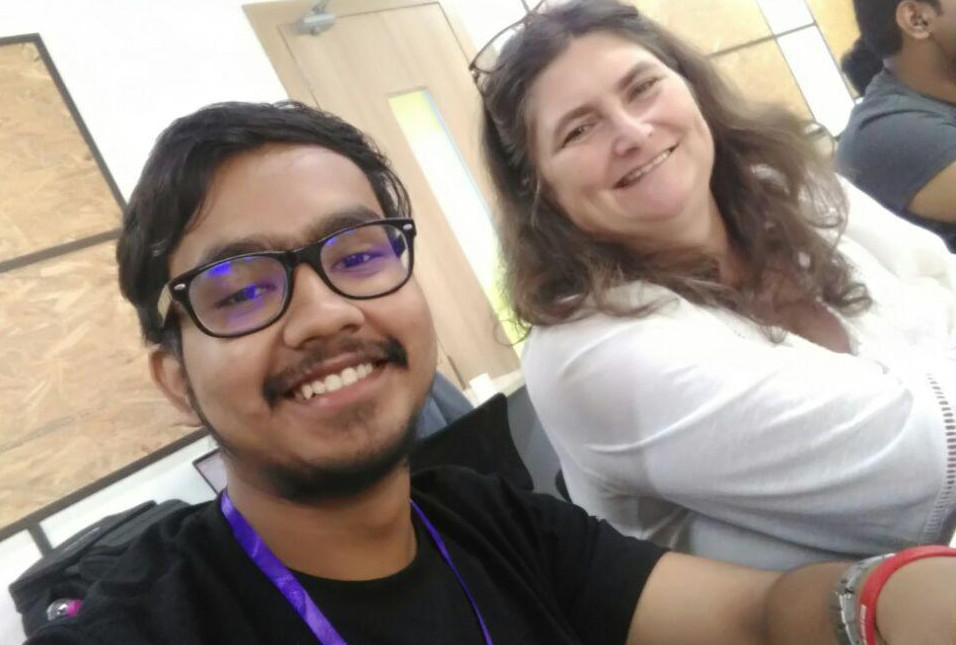 I had so much to learn from this woman! This is how my heroes look like.

After two days of dev-sprints (which also helped me grab a chance for Hacktoberfest t-shirts), I had to return to my college.

Although, I did want more. I was content. I was happy. This has changed me. This is what open source is all about. It’s about creating connections, which leads to wonderful results.

These days I have been writing code and contributing to open source almost everyday.

I have met people who have impacted the lives of millions. They talked to people for hours. Sharing ideas, thoughts, experiences. They weren’t bothered. They seemed happy to share it all. I don’t know how they do it, but they did.

I would come back here hundred more times if I could. But I guess I won’t be alive for that long. Alas.

I couldn’t have asked for more. Thank you Pycon. For the t-shirt, the goodies, the food and the experience.

If you are a programmer who hasn’t visited Pycon yet, do yourself a favor, visit Pycon. The experience would be worth remembering and sharing. I will see you there next year!

I realized, it was never just about Python. It has always been about the community.

Dedipyaman Das is a software developer and a student from India. He writes about software, and likes architecting web system solutions.

All the views, thoughts, and opinions expressed in the text belong solely to the author, and not necessarily to the author’s employer, organization, committee or other group or individual.